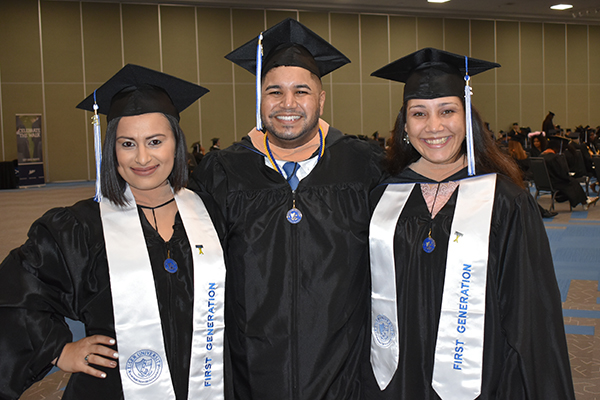 Keiser University hosted its annual statewide commencement ceremony on Saturday, February 5, 2022, to honor its more than 6,000 graduating students from the class of 2021. More than 300 students walked across the stage Saturday to receive their degrees and begin the next chapter of their lives.

The ceremony was presided over by Keiser University Chancellor and CEO Arthur Keiser, Ph.D., who welcomed those in attendance and reminded the graduates of the support they received from their families and loved ones throughout their experience. “We know that graduating from college is a journey, and it is a wonderful achievement for you; but it was possible because along the way many others supported you and believed in you, said Keiser.”

The Florida Hospital Association, Tampa General Hospital (TGH), and Lakeland Regional Health (LRH) were honored during the ceremony with Keiser University’s Employer Choice Awards for the vital roles they play in the real-world preparation and hiring of Keiser graduates. Many of those among the Keiser University class of 2021 are filling critical gaps in Florida’s allied health and nursing workforce.

“Florida and the country are facing one of the worst healthcare workforce shortages in decades,” said Mary Mayhew, President and CEO of the Florida Hospital Association. “We know the only way to tackle these significant challenges is through critical partnerships and we are honored to be working so closely with Keiser University to advance various efforts and strategies to increase the supply of new nurses and other critical healthcare professionals.”

Keiser University has graduated more than 3,200 nurses since 2019 and is one of the top producers of nurses in Florida for those who pass the NCLEX. In the last 10 years, TGH and LRH combined to hire more than 660 Keiser University graduates to help meet Florida’s growing workforce demand in nursing and allied health.

John Couris, President and CEO of TGH, noted the hospital’s partnership with Keiser and shared that the university’s commitment to producing qualified graduates has aided in TGH’s ability to provide quality healthcare to Florida. “Keiser University, its students and its graduates, are critically important in our ability to provide world-class care to this community, this region, and this state,” said Couris.

As a career-focused university with 21 Florida campuses, two international locations, and a robust online division, Keiser University continues to address the talent needs of Florida and the U.S. Most of Keiser’s academic degrees are in industries identified as emerging or critically needed. More than 3,200 nurses have graduated from Keiser’s College of Nursing since 2019 and the university is one of the top producers of nurses in Florida who pass the NCLEX. Keiser University was ranked No. 5. In the nation and No. 1 in Florida for social mobility in the 2022 by U.S. News and World Report’s Best Colleges rankings. Keiser’s other recent accolades include having the seventh best graduation rates among U.S. private, nonprofit (nonresidential) universities according to The Chronicle of Higher Education and being named the 29th Best Hispanic Serving Institution in the U.S. by Niche.

Take Action Now to Save EASE