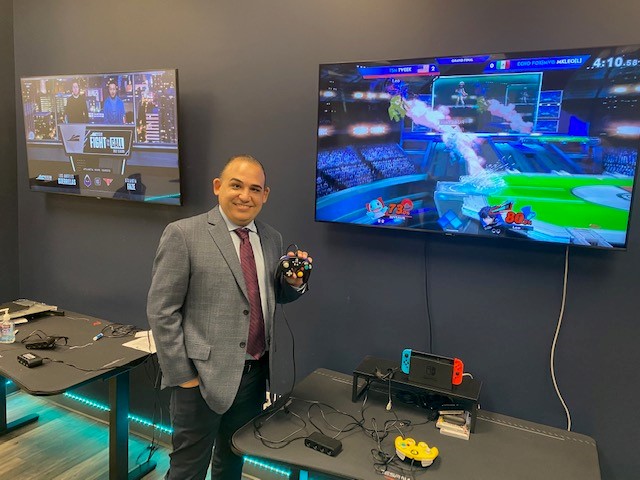 Keiser University Pembroke Pines graduate Johnny Linares was honored by the Mayor of the City of Miami Lakes in a public ceremony earlier this school year for his outstanding work in the community and at Keiser University.

Linares, who graduated with a Bachelor of Science in Animation and Game Design, has spent the last two years volunteering with many prominent Miami Lakes organizations. He is well known in the community for his work with the South Florida Autism Charter Schools and his time at the City of Miami Lakes Town Hall.

Keiser University Pembroke Pines student services director Jakelin Miranda said that Linares is extremely passionate about being involved not only with the community, but with his campus, as well.

“We all knew who Johnny was because he participated in every event that happened on campus,” she said. “And he helped out with a lot of different events.”

Linares chose his bachelor’s degree in Animation and Game Design because he has played video games since childhood and felt inspired to create something of the same magnitude. Not only was he a founding member of the Keiser University Keiser Clicks club, but he also began selling his animation artwork.

“Graduating from Keiser University is an experience that I will never forget,” Linares said. “Because I have the support from my professors, my friends, and my family.”

While volunteering with the South Florida Autism Charter Schools, Linares was able to mentor adult students with autism spectrum disorders (ASD) as they pursue a career in higher education. Linares is also on the spectrum, and Miranda said he is very proud to speak of his accomplishments.

“I inspire people with autism, like me, to better their lives and overcome the different challenges that we face with autism,” Linares said.

Linares created a painting titled ‘Touch the World with Autism,’ which was displayed in the Miami Lakes Town Hall for several weeks before eventually being purchased.

At the ceremony, members of Town Hall presented Linares with an award for his dedication and hard work in the community. With the addition of a recent bachelor’s degree from Keiser University, Linares plans to continue his work with the community and pursue a career working remotely in video game design.

“In the next two years I see myself as an employee working in a video game company,” he said. “And I want everyone to know— never give up on your dreams. Always believe that anything is possible with dedication and persistence.”