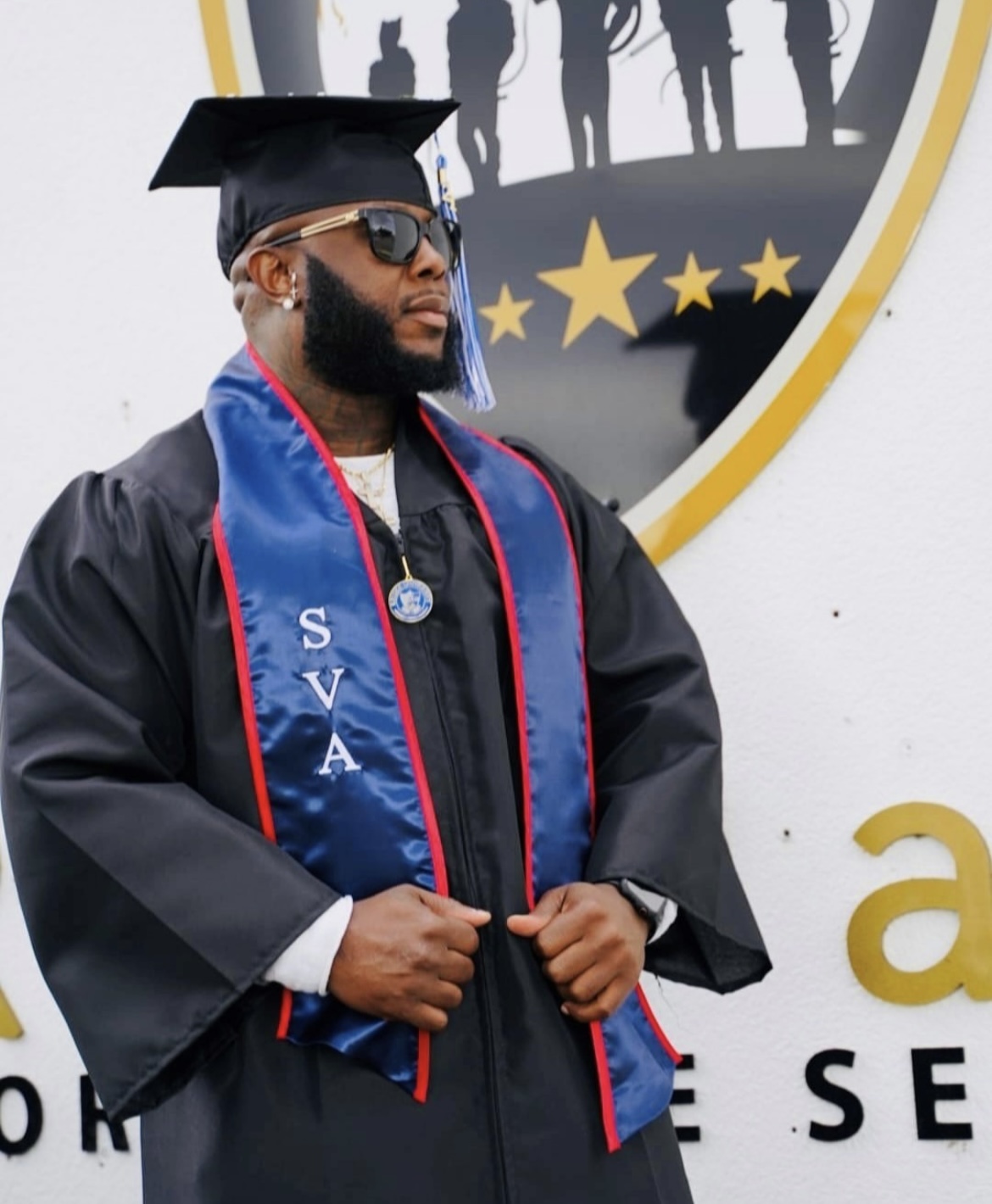 Jewral (Jayr) Mcintyre completed one of his biggest challenges yet by earning his bachelor’s degree at Keiser University Tampa earlier in the month.

The Army Staff Sgt. and Bronze Star recipient was deployed a total of four times throughout his military career and retired in 2016 after being medically discharged with severe Post-Traumatic Stress Disorder (PTSD) and a Traumatic Brain Injury (TBI).

He moved to Tampa after retiring and spent more than seventy-seven days in hospitals coping with his PTSD and working through his injuries. The frequent hospitalizations gave Mcintyre a change of heart, and soon after a friend suggested Mcintyre enroll at Keiser University to pursue a higher education. The decision is one that changed his life.

Mcintyre bonded with Michael Wilkes while enrolling at Keiser, an admissions counselor at Keiser University Tampa, and referred to Wilkes many times as his “guiding light” throughout recovery. He attributes Wilkes to giving him hope that being a viable member of the community was still possible, despite his disabilities.

Working toward his degree and bonding with other veterans on campus gave Mcintyre a sense of purpose and inspired him to take leadership as the president of Keiser’s chapter of the Student Veterans of America organization. Mcintyre began assisting other veterans in pursing their own degrees at Keiser University.

“I was telling them, hey, you do not have to sit in the house. You can go to school, use your G.I. Bill,” Mcintyre said. “I wanted them to get the experience that I was getting.”

One by one Mcintyre took fellow veterans under his wing, providing them shelter at his own home, feeding and clothing them, and assisting them in applying to Keiser with their G.I. Bills.

“I want to prove to the world that veterans with injuries can continue to help the community,” he said, referring to his passion for helping other veterans. “We really want to contribute.”

Many of the students he helped enroll have already graduated or are still working hard at achieving their degrees. As Mcintyre himself walked across the stage in early June, he said that it was a mix of emotions.

“It was a ton of emotions because not only did I walk with my name, I walked with the fallen veterans who could not do it, who are not here anymore,” Mcintyre reflected.

Mcintyre said that attending Keiser kept him focused and involved, and his wish for the future is to inspire other veterans to do the same.

“You can do this,” Mcintyre said, speaking directly to struggling veterans. “If they need me, I will go and be the guiding light to talk to counselors for them. I am willing to do that.”

This fall, Mcintyre will be attending Keiser University Tampa to complete his M.B.A. in in International Business, which he plans to apply to his private security business, Rat Pack Worldwide Security and Consultant Inc. He began the business back in 2018 with fellow veteran and Keiser University graduate, Remi Rivera.

“I want them [the student veterans] to be great. I want them to further their education, get out of the house, do something with it,” he said.